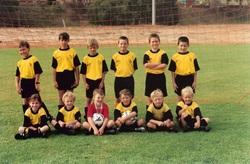 Amanda and Steve Hawkins moved to Balingup with their young family in 2000 from the suburb of Forrestdale in the Perth Metro area.  Steve had a 28 year history with the Armadale Soccer Club, so it didn't take the couple long to realise that the region could do with a Soccer Club.
They started by teaching some lessons at the Balingup Primary School and soon started lessons after school on the School oval.
In no time at all, parents from the near by Schools of Greenbushes, Kirup and Bridgetown started to attend and the numbers swelled that much that a bigger venue was required.  The couple soon realised that the local town oval was an option and although it hadn't housed a sporting club in almost 30 years and the ground was in a very poor condition, they felt this was the best option, although the nearby oval at Greenbushes was also thought about in earnest.
The player numbers continued to grow so it was decided to form a couple of teams and nominate them in to the Lower South West Soccer League (LSWSL) 2002 / 03 season.  A committee was formed and a constitution written and so began the Balingup Soccer Club inc.
The LSWSL was formed a couple of years earlier.  The competition was played in the summer months from September through until February, between the Towns of Bridgetown, Manjimup, Northcliffe and Pemberton. 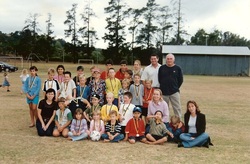 With the assistance of Tony and Jackie Hawkins, Vikki and Steve Thompson, the club quickly established a strong Ethos which continues to this day.  There were plenty of willing volunteers in those first couple of seasons which helped the club be healthy with coaches, managers, canteen staff, kit washers, orange cutters and the like always willing to assist.
Pictured to the right are some of the players in those early years along with coach helpers Steve and Tony Hawkins, Sharon Saia, Lucy Brandenberg.